We Need More Protestants on the Court 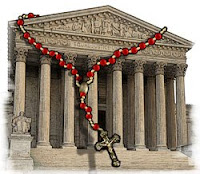 With Sonia Sotomayor's confirmation to the Supreme Court, that brings the court's religious demography to six Catholics, two Jews and one lone Protestant.

As a white male Protestant, I'm pretty sick of being underrepresented in this country...
But, more importantly, why are Catholics such a safe choice in terms of nominations?
- September 08, 2009
Email ThisBlogThis!Share to TwitterShare to FacebookShare to Pinterest

But couldn't you argue that the overwhelming majority of US presidents have been protestant? I may be mistaken but I think Kennedy was one of the only Catholics. I would have to ask someone who has done a lot of research on our presidents lately...

ok, just for the record, i was kidding about being angry.

yes, Kennedy was the only Catholic. We've had actually had 4 Unitarian Presidents in the past, and I don't think one would have a chance today.

So, why does being Catholic increase your odds of the Supreme Court while being Protestant increases your chance of the big gig?