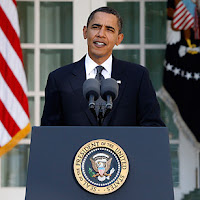 More than a month ago, The Norwegian Nobel Committee awarded Barack Obama with its Nobel Peace Prize. And it has taken me these last five weeks to really understand why.

I believe it was a pre-emptive desire by those on the committee to see the man who ran for office on a peace platform to reclaim that vision. And I also think it was a brilliant move. Think about it. Let's say Obama listens to his generals in either Afghanistan or Iraq and commits to another 6, 12, 18 months in either place. The headline back home? Peace Prize Winner Prolongs War. That's the kind of headline that stays in the news cycle for weeks and could have crippling aftermath.

And I think the Nobel committee is counting on Obama's advisors considering that before making any more Bush'esque decisions. They want to see the man that ran for President serve as it.
- November 23, 2009
Email ThisBlogThis!Share to TwitterShare to FacebookShare to Pinterest
Labels: nobel peace prize, obama

You have to admit though, it's fairly significant that he won the prize merely for not being GWB...