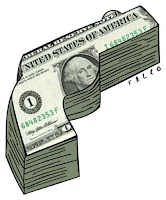 In this week's speech from West Point, President Obama cited - among other things - economic reasons for setting a timeline to exit Afghanistan. Certainly, no one can argue that the wars in Iraq and Afghanistan have not been costly. But is there really as much of a connection between the current economic crisis and the high of these conflicts as has been purported? Did these spur a culture of unsustainable borrowing by homeowners and insanely risky lending/derivative trading by "Too Big to Fail" institutions?

It seems that the high price tag of these military endeavors probably falls under the same category of GDP - both are technically important economic measures but realistically have little direct impact on a 10.2% unemployment rate. Then again, most people have been fairly well trained to blame the economy for all kinds of issues over the past year, and perhaps that is what President Obama and his speechwriters were banking on. So was the economic angle of this speech really the most compelling argument or just the easiest way to sell the final decision to the American public?

(If you would like to contribute a guest post on All Opinions Are Not Equal in order to spur debate, please e-mail me your submission and include your name and hometown)
- December 04, 2009
Email ThisBlogThis!Share to TwitterShare to FacebookShare to Pinterest

i took it to be more of a "let's not spend when we're in so much debt" type call (which I love to hear), but of course that makes no sense when the day before he's calling for a new $900 billion healthcare entitlement program.

Relating to yesterday's post, I think Chris was right in saying Obama was consistent with what he campaigned on - that Afghanistan was the "right" war. But I think Eric was right in that the general public that probably wasn't paying enough attention perceived him to be a purely anti-war candidate. I think the economic reasons given in the speech were an attempt to reconcile these in a way that didn't entail crushing the perception of either branch of his supporters. Whether it really worked is another issue.

see, I think that's the thing. He talked about "reasons for leaving Afghanistan" in the same paragraph he talked about "sending 30,000 new troops IN". i know it CAN make sense, but it's also a bit confusing.