The Necessity of a Winter Christmas 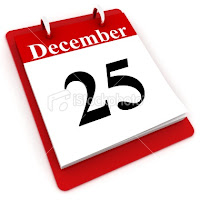 Most historians believe Jesus was either born in March or April. None believe December 25th was the actual birth date. This date originally became tradition as the church sought to redeem a previously Pagan winter holiday.

But, isn't it great that Christmas is in the middle of the worst season of the year?

It's this nice warm, beacon of light that helps break up the horrible cold. You don't even really think about how gross it is outside until after Christmas, because of the anticipation that precedes it. And after the holiday rush is over, there's only a few months of horrible left before spring comes again.

If we celebrated Christmas in March, we'd simply create something else to break up the cold. Or maybe New Years would be even bigger than it is?
- December 28, 2009
Email ThisBlogThis!Share to TwitterShare to FacebookShare to Pinterest

Agreed. If Christmas weren't in the winter, it would be bleak from end of October until March. Although President's Day will be much more fun this year with your presidents' videos!