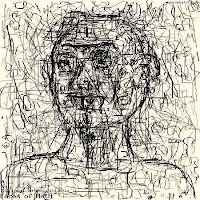 In the philosophically-provocative film, Waking Life

(which also explores the idea of stream-of-consciousness mentioned the other day), an animated Ethan Hawke teaches us about a fascinating crossword-puzzle experiment.

This anecdote was based off a real London study that proved a person's ability to solve a crossword puzzle is statistically affected by whether or not other people have already solved the same puzzle.

Does this imply that, once information is out there, people can pick up on it?

This idea has already been popularized with countless inventions and vaccines having been simultaneously created in separate parts of the world within a 3-month period. So, the question becomes, once someone thinks something up, is everyone else just picking up on that? Or is the original idea not coming from the human level in the first place?

Ok, I warned you this was going to be "weird week". But, here's the way this becomes less weird to me. We can create these little dinky, incredibly simplistic remote controls that can influence an electronic device from across the room. Why are we opposed to the idea that the incredibly complex human brain can do something similar?
- January 07, 2010
Email ThisBlogThis!Share to TwitterShare to FacebookShare to Pinterest

Just another example: Thomas Edison put in the patent on the light bulb 1 hr before a French scientist put his into it. More recently a chemical compound never heard of was discovered early last year by scientists in iowa. As you would think this group was excited about their discovery, so much so that it would be the highlight of one researcher dissertation. However, on the other side of the world Nother group had already submitting the finding of this 'unique' finding merely days prior.

The new dan brown book has a character who works in this field. Which I had never heard of. Noetic science. Seems kind of cool I don't knowhow much of what he cites in the book is true though.

Very interesting post. In fact, I was just thinking about this the other day... Seriously though--I was.

I have actually been thinking about this a lot lately too. I saw a documentary on the reported psychic Edgar Cayce. They talked about how he said all of the 'truths of the universe' are accessible to all of us, you just have to find a way to channel it in a way - sort of along the same lines as once something has been 'put out there' other people can pick up on it. It's strange to think that people today could tap into what we think are mysteries of the past (such as the ancient world) because the knowledge of what happened exists around us. I definitely think there is something to the power of the human mind . . . I sometimes wonder what we could accomplish or discover if everyone in the entire world would think the same thing at once - it has to be pretty powerful...

actually, I'm quite certain that had to have been how the deep dish pizza was invented, Meghan.

Forget cancer, jump on this bandwagon.