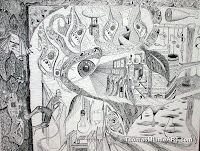 Meaning, they wrote as they thought - in real-time. No forethought. No plan. They just wrote. It's ALMOST as if they acted as the pen, and either they subconsciously or someone/something else did the writing.

Now here's the crazier part. Both Woolf's novel, "Mrs. Dalloway" and Joyce's "Ulysses" are widely acclaimed as two of the greatest fiction books of all time. In fact, "Ulysses" often ranks first on the list.


How is that possible? And why do we want to reject the thought of anything weird going on.

- January 05, 2010
Email ThisBlogThis!Share to TwitterShare to FacebookShare to Pinterest