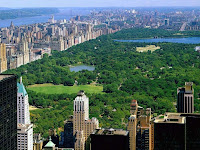 On a gut level, I enjoyed New York City a lot more than I've ever liked Chicago. And I'm still trying to figure out exactly why. Here's my starter list. Feel free to add to it or argue against it.

1) Times Square vs. Nothing
This part of the city is simply unreal. It's big. It's safe. It's futuristic. It's wonderful. It has everything.
2) 5th Avenue vs. Michigan Avenue
Both are awesome streets to shop on. A virtual tie.
2) Central Park vs. Nothing
Chicago has nothing close to this 843 acres of roads, paths, walkways, trees, hills and water.
3) Lack of Solicitation
We were asked for money a grand total of 0 times during our 4 days in the city. Now our friends who live there say that it would have just been a matter of time before we'd come across it. But, I have yet to experience even a single hour in Chicago without being accosted for change. Some people don't mind. I hate it.
4) No Alleys vs. Visible Garbage
New York City has no alleys, which really helps in terms of safety, both real and fictitious. There's no hiding places for the people I assume are carrying knives and waiting to shiv me. This also makes it so that the curbs are continuously piled with garbage. I didn't mind as much in the Winter. I'm sure in the summer, the stench could be unbearable.
5) Street Width
Perhaps because of the lack of alleys, NYC's streets seemed to be a little more narrower as well, which helped in terms of people/sq. ft. and a general feeling of safety.
6) Ease of Transportation
Because Manhattan is condensed to an island, they were forced to treat space as a premium. Chicago, not as much. So, everything in Manhattan is just a little bit nicer. A little bit easier to get to.
- March 03, 2010
Email ThisBlogThis!Share to TwitterShare to FacebookShare to Pinterest

yeah, that was intentional. I don't think Grant Park or Millenium Park rival Central Park. They're completely different. In both size and feel. Central Park isn't just flat. It has dips. water. woods. parks. It's way larger. just not a comparison.

Millenium Park specifically is probably my favorite part of Chicago. But, it's just not the same.

7) Knicks vs. Bulls
They both suck, but the Knicks suck more. But if you go to a Knicks game you are likely to see Lebron or Kobe drop 60.

so, NYC wins there, too.

There's no way NYC wins in sports. If you take just this year alone, perhaps not, but over the course of time there's no doubt.
Bulls > Knicks
Bears = Giants
Yankees > Sox
Cubs > Mets
Hawks > Rangers

how do the bears = giants in your book?