Why I Don't Drink Alcohol 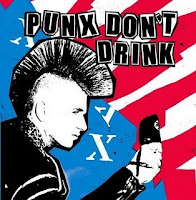 I know it's unfashionable today, even for a Christian. But, my wife and I are teetotalers (don't drink at all). My reasons have changed over the years. Family history. Religious conviction. Seeing the negative effects firsthand. Misappropriated legalism.

But now, I think the main reason I don't drink is because it's quite clear that people aren't mature enough to handle it.

These are the same jokes that made me stop drinking when I was 18 years old, less than 6 months after I had started. Witnessing the stupidity of collegiate freshman was enough for me to hate both the idea of, and the effects of alcohol. And now, I've realized this mentality has nothing to do with age. We're getting older, but not growing up.

We still think it's funny when someone talks about needing a drink at the end of a hard day. And not only do we encourage them in this feeling, but help rationalize that they (and ourselves) deserve it. Rather than working to change the circumstances that 'cause this mental desire to relax through alcohol. And that's terribly sad.

Start listening and you'll learn to hate it, too.
- March 18, 2010
Email ThisBlogThis!Share to TwitterShare to FacebookShare to Pinterest

I think it's important to make a distinction between drinking in moderation and drinking in excess. Some people actually enjoy the taste of wine or beer (not me!) and treat having a drink as an indulgence, like a dessert. For most people, one drink is not going to significantly alter their behavior. A lot of people who have a hard day go to McDonald's or eat cookies, so having 1 drink isn't really that much different.

Drinking to excess is a different story. With that comes impaired judgement and, in it's worst manifestation, can sometimes lead to drunk driving.

As I get older, the appeal is less and less, not entirely because of maturity but more because my body just doesn't deal with alcohol as well now.

I understand that for you, being someone who doesn't drink, it's annoying to hear people go on and on and glamorize drinking. I find it annoying too sometimes!

Don't even get me started on this subject! I totally agree with you. Although I came from a family who didn't drink much anyway, having "tried" a few tastes of wine coolers, etc, after becoming of age, I never understood why people could like a) the taste and b) the feeling of losing your inhibitions (not that I ever went that far - couldn't even finish a wine cooler). It is that careless mentality of "I do whatever I want to do and everyone else can pick up the pieces of my mess" is what is so irresponsible about our generation of drinkers. I can't stand people who don't take responsibility for themselves or consider the effect their actions will have on others. But what can you expect when drinking begins in high school when immaturity reigns and then continues as a pattern as they grow up? If they get addicted to that play-hard, live-fast style of "freedom", they won't care about changing. I developed a deep hatred of anyone who drank in college. I judged them so severely as losers who couldn't stand up to peer pressure and were sheep being eagerly led to the slaughter. Now I understand that not everyone had a background/personal conviction like I did and that I am not perfect in many areas of my life. I just had to recognize that this is where they fail and I fail in other areas...

OOOOh! Very interesting topic indeed!!! I actually enjoy the taste of Alcohol. But I respect that there are people out there who can't control themselves. I try very hard to not be a "stumbling block" for those who are trying to abstain.

However, to clarify my understanding , when you say "people aren't mature enough to handle it." You were only talking about a specific group of people that you have seen right?

Because generalizing EVERYONE who drinks with that statement only shows how much you are not aware of.

I agree with Meghan and I also think that people glamorize their drinking in conversation because it's a way to fit in with the crowd. It's a way to establish yourself right away. I'm cool. I drink. Who's with me? Instant friends. I think it takes much more courage to be someone who doesn't "fit in" due to a lack of that lifestyle. Even though our age group is "grown up" now, isn't it still, deep down, about fitting in and being cool - for that type of person who drinks as a lifestyle?

I agree with Rev. David Mullen. I doubt you'd appreciate sweeping judgment about people who don't drink, and it goes both ways. There are plenty of people who indulge appropriately.

My goal is simply for you to start paying attention to conversations that spring up about drinking. And to see if it starts changing your mind over time.

I never drank before I was 21, and to this day, I've never been anywhere even close to drunk. I don't like beer and most wines, but I do tend to like sweet and/or fruit-based drinks. Because of the fact that I really only like 'girly drinks' and often will choose, say, Mountain Dew over a beer, I often get teased and chastised by colleagues at social gatherings. Isn't that ridiculous?

Ok, Ryan's last comment is going to pull one last thought out of me. Why do so many "mature" drinkers still push non-drinkers to drink in social occasions.

To justify and have confidence in their own behavior. If the masses do it, it's not possibly wrong.

Eric, your last comment really hits home with me. Like I said before, I just don't drink very much because I feel absolutely horrible the next day, even if I just have 1 or 2 drinks. I am so sick of people trying to get me to drink when I don't feel like it. It's gotten to the point where I consider not going out with people who do this because I'm so tired of the questions, "are you drinking? why aren't you drinking? come on just have one." I'd expect this out of college-aged people but at our age? Really?! How does what I do/do not do affect you?

I was in a room full of Kellogg School of Management alumni last night. I'd say there were about 3-4 comments along the lines of, "alcohol would make this event way better." I don't really know what to make of it, but it made me think about this post right away!

exactly. it's like when you learn a new word and hear it on the news that night.

keep listening, and prepare to be uber-creeped out.

And don't you love how if a female chooses not to have a drink, there can only be one reason for it: SHE MUST BE PREGNANT!