The Mob Still Does Stuff in Chicago? 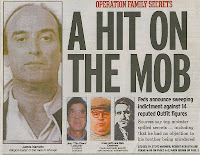 We recently had friends come in from the U.K. to visit, and I was surprised to learn something about the foreign perception of Chicago. I thought Michael Jordan would be the first thing they thought about when they hear, "Chicago."

They both shook their heads, and one of them made a machine gun gesture and yelled "Al Capone!"

They think of Chicago as a mob-town! Even today! And that was so disenchanting to me. But after an Easter history lesson from my Italian family, I realized I simply lived in a suburban bubble of wishful thinking.

The United States was never a melting pot. People immigrated from Europe and created little mini-towns in whatever cities they went to. Little Italy. Chinatown. Etc. So, the mob worked the same way. The Italian mob and the Irish mob were the main players in Chicago for years. But, the Irish mob decided that getting into politics would be the best way to control the game. And they got in. So, from then on...Unions. Police. Government. All Irish-run. In fact, The Daley's, one of the big families in the Irish community have held the position of Mayor for a combined 42 years and counting.

The Italian mob got stuck with gambling. (Neither side admits to drugs...)

But as far as that all being behind us, I was sadly mistaken. SUPER creepy stuff goes on, even today. Like its nothing. Like its the way stuff gets done.
- June 01, 2010
Email ThisBlogThis!Share to TwitterShare to FacebookShare to Pinterest

C'mon, Eric. You cannot just offer "super creepy stuff goes on today" and leave it at that. That's Shields without Yarnell, A without men, Van without Buren...

Do tell...
Clark from NJ

i learned enough to know not to say another word, lest this site goes down tomorrow....

I'm doing work for "favors" right now, and that Easter convo is definitely on my mind.