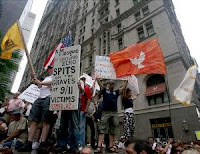 (this is a true story)

Two men went to Ground Zero this past Sunday during a protest against plans to build a mosque just a few blocks north of where the World Trade Center towers once stood.

These Egyptian men began speaking in Arabic to each other, and quickly attracted the attention of the mob around them. The group began shouting "Go home!" and "Get out!" to these men who quickly became both afraid and defensive, before NY police had to intervene and pull the men to safety.

It turns out these two men, Joseph Nassralla and Karam El Masry, were not Muslims at all. They were Christians working for a California-based Christan television network called "The Way" that had flown in to protest the mosque.

It's simply beautiful irony. And I want to know if those men still want to join these protesters that so quickly thin-sliced them as infidels.
- June 09, 2010
Email ThisBlogThis!Share to TwitterShare to FacebookShare to Pinterest
Labels: mosque, world trade center

I read the real article too. So if they spoke english why were they speaking arabic? I think that was just dumb on their part too. I think it's fine that they want to build a mosque. It was actually a couple blocks from there, where there used to be a Burlington coat factory. Some people need to just chill out. Sure, 9/11 was awful, I can see their point if it was a couple years ago, but nine year?

glad you have you around thinking with us, Ace!

Sure they CAN build the mosque there, no real problem with it. However, let's say we have a shrine to Hilter next to Holocaust memorial, or at Arlington national cemetary. Is this okay? Sure may cause some uproar.

I think people will take this in the same light, not that it is right. Emotions are going to be there no matter what is built short of a memorial to the people lost. The mosque is probably the opposite of what people wanted.

Should there be a church of any kind there? No probably not, just some sort of memory of the fallen possibly.

The Hitler statue would only be comparable to an Osama Bin Laden statue.

Would it be weird to have a Christian church build on the site where thousands of Jews were killed during the Holocaust?

I think a hitler shrine would be different. There's also a difference between building the mosque next to the world trade center and a couple blocks away.

Greeks must not be allowed to revive their tsar-build islamo-sviet temple on world trade center sacred ground! Greeks have always harbored islamosoviet terrorists. On the Thursday before Easter Greeks chant pogrom inciting Beatitudes against "godslaying lawless Jews"in Greek, but change it to "Assemby of Jews" in English. They removed American Archbishop Iakovos because he was too American and Jerusalem Patriarch Irineos because he was too friendly with Israelis. Old witches who used to work at diners until they dropped now slip "Elder Protocols" and other terror claptrap in the pews. When I was growing up priests, would bathe, shave, wear pants - Robed, bearded, stovetopped priest is terror sympathist by definition. Greece was only euronation not to vote for 1947 Israel creation. In such time of war, we should insist that any public assembly of more than ten mandatorily be only in English! We have freedom of worship and speech, but not language.