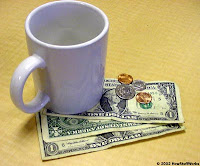 One of my favorite scenes from the sitcom "3rd Rock from the Sun" - a comedy about 4 aliens in human form sent to observe the human way of life - takes place when one of the aliens was learning the custom of tipping.

In this fictional TV world, the waiter immediately embraced the idea and proceeded to deliver attentive service.

My point is that tipping is weird. The waiter is penalized if I order a lunch item, and rewarded if I splurge for a steak, yet the plate remains roughly the same weight and no added work was required for one or the other.

Let's pretend restaurants decided to get rid of tipping. All other things equal, the waiters are now making $3-something bucks an hour. So, what happens? These grossly underpaid workers try making a switch to a retail or other more competitive industry. But, these restaurants, still requiring service workers and unwilling to go bankrupt bump up their salaries to be competitive.

Food prices go up, but real prices end up about the same, because you're not tipping anymore.

I know I'd be happier.

For those of you about to say that waiters will lose their incentive to work hard, there are plenty of other ways for management to judge performance. You're not tipped, are you?

What say you?
- August 12, 2009
Email ThisBlogThis!Share to TwitterShare to FacebookShare to Pinterest

I think your idea is brilliant. But like you said, management doesn't win if they have to compensate for the lost tips, so it will never happen. Why change my business practices if my clientele are subsidizing my payroll?

Management could win big if people feel more comfortable dining in a no-pressure environment. It'd be a differentiator in the market.